Nearly nine years ago, Yulia Zmyzhova made a leap of faith — and a geographical leap, as well. Having lived in California for several years after emigrating from Ukraine, Zmyzhova couldn’t help but hear what she calls “beautiful murmurs of New Orleans” – the food, the people, the art, the architecture. 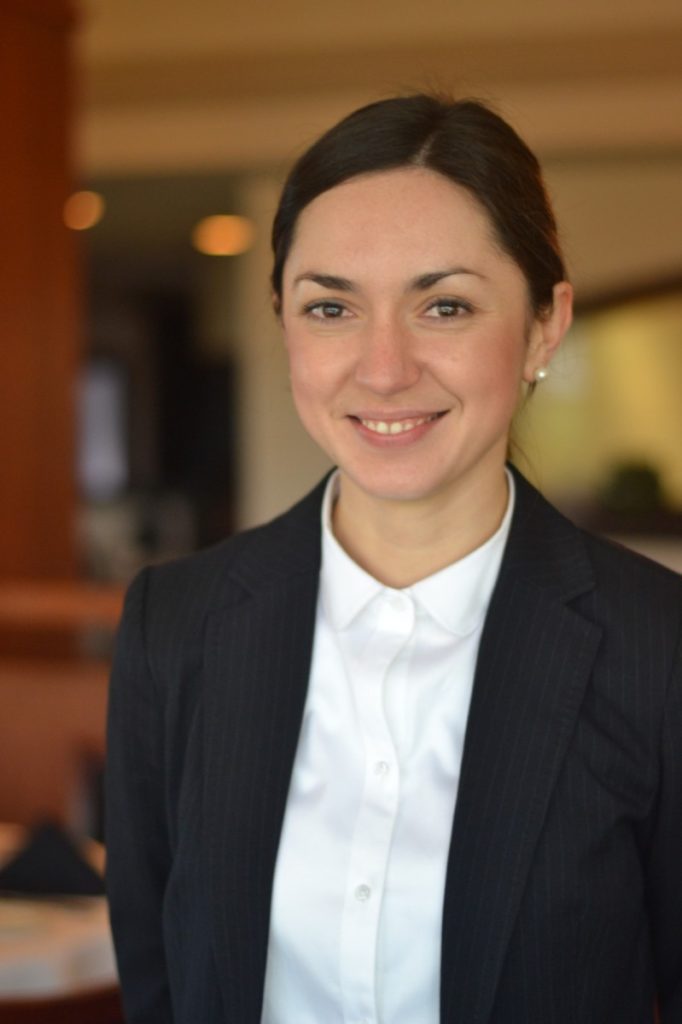 Just like the move, Zmyzhova’s career in hospitality was somewhat unplanned, too. She says she walked into Bacco (now SoBou) to become a server, and “that was it.” Since then, she’s made her mark, having worked with the Brennan Restaurant Group for eight years and at four different restaurants, including Red Fish Grill. Today, she’s as a manager at the beloved Royal Street establishment, Brennan’s.

Zmyzhova is carving out a lengthy path in hospitality one dining experience at a time. “Over time, I started to see real personal and professional growth in myself,” she says. “[It] was a feeling I never wanted to lose!”

Read more about her story below.

It was nearly nine years ago that, trailing behind my ever-braver sister, I took the huge leap of faith that landed me down here in New Orleans. I had moved from Ukraine to California several years before, and had heard beautiful murmurs of New Orleans and Mardi Gras – of it’s soulful food, sounds, and people – from a friend already living there. The bright images he described stuck with me, lingering for a long time in a back corner of my mind. When some troubles began weighing on me in California, a little voice kept on urging, “New Orleans! New Orleans! New Orleans!” But it was my fearless sister who first made the jump. A month later, I was right there with her, and neither of us have ever looked back.

What do you love most about this city?

Tell us about your role at Brennan’s?

On August 5 of this year, I will have worked with the Ralph Brennan Restaurant Group for eight years! Over this time I have worked at four different restaurants in the group. Inexperienced and somewhat unconfident, I started out at Bacco as a server, but with the help of so many great and professional people, I have worked up to where I am today—a manager at Brennan’s, a position I am incredibly proud of.

What path led you to this point in your career? I read in the Louisiana Restaurant Association newsletter that you’ve had quite a journey!

Just like my move to New Orleans, my path towards a career in hospitality was unplanned. One afternoon I just walked through the doors at Bacco, and that was it. I liked that the job was different every day, that I met new people, and I was learning so much. So, I decided to stick with it. And here I am, eight years later!

What do you love most about your job?

I love that it is never the same, that each day holds a new experience. The Ralph Brennan Restaurant Group has given me the opportunity to work at many different establishments—be it at Brennan’s, serving some of the best food and wine in the world, or at Red Fish Grill, where we welcome over 700 guests within a five-hour window, providing each of them amazing food, service, and atmosphere. Hospitality all comes down to people, and I have met so many talented, passionate, and engaging people on this job. After each meal, I leave the restaurant knowing I have been a part of a lasting memory for our guests.

What advice would you give to other New Orleans residents or your peers about choosing a positive career path, perhaps in the tourism industry?

Here’s what I would say: The path is not always easy, and just as in every career, it has its ups and downs. The special thing about this industry, however, is that it gives you opportunities to grow, professionally and personally, every day. If you are determined, and if you are passionate, it becomes a ladder that rises without end. You can always go further, and you can always keep growing.

How is your job personally affected by tourism?

Tourism supports the restaurant business so profoundly. From the moment we open our doors in the morning until the moment we close them at night, we welcome a constant stream of people from so many towns, cities, and countries across the world (and, of course, our loyal locals!). Some are in town on vacation, some on business, some for the first time, some for the tenth, but each and every one of them is drawn to Brennan’s by a wish to enjoy the culture of New Orleans.

What does tourism mean to you as a local?

As a local now, I see the incredible impact tourism has on my own life and on the entire community. Tourism allows me to meet people from the most far-flung parts of the world, from places I have never been to, and even from places I have never heard of. It makes my everyday life more interesting, more fun, and more enriching – it is very special being a part of a guest’s New Orleans experience. And, of course, tourism gives me a job!

What do you think the city of New Orleans would look like without tourism?

New Orleans would be too empty and too quiet! This city draws so much of its soul, and so much of its flavor, from the never-ending flow of fresh spirit, life, and perspective that is infused by tourism.