There is no such thing as “too much information” in New Orleans. We ask about your momma, and we ask after the kids and the job, and we share with strangers the intimate details of our loves, lives and most recent medical procedures.

We are charming that way. Perhaps even a little forward. But never guarded.

We are open, warm, welcoming, solicitous and nearly pathologically hospitable. We’re the last people in America to still invite strangers over for supper.

Hospitality is practically a birthright in a city like this – so international, cosmopolitan and transient, yet so down home, home-spun and easygoing.

Hospitality courses through our bloodstreams; it comprises our communal DNA. An open door, a light on and a warm greeting are international welcoming gestures, and here in New Orleans, everyone speaks that language. We never close the door, rarely turn out the light and unfailingly say hello. This is the way it is and always has been.

New Orleans is inherently resistant to change, and you don’t need studies, statistics or surveys to prove it.

Just take a look around you, at all the wrought iron – the city’s famous drapery of “iron lace” – installed on our balconies and banquettes in the early 19th century and still reflecting starlight like little diamonds in the night.

Take a deep breath in the French Quarter; it smells exactly like it did in 1900 – sweet olive and jasmine, oysters and fresh catch, smoke, mules and the mist from the river – and always a scent of the forbidden. 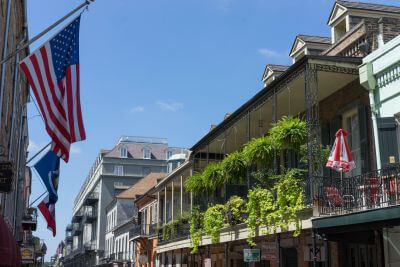 The wrought-iron balconies of the French Quarter. (Photo: Paul Broussard)

Check into the old Roosevelt Hotel — a vibrant homage to America’s revered grand hotel tradition that changed its name in the late 20th century, only to later change it back. Because we liked it better that way.

Take a meal at a restaurant where the dining room tables, chandeliers, recipes and even the font on the menu are the same as the day it opened in 1840. (Although, as a begrudging concession to modernity, Antoine’s eventually did start printing that menu in English.)

Perhaps there are academic or government studies that measure the percentage of a population that still cools their homes with fans and not air conditioning; that doesn’t have Wi-Fi or cell phones; that prefers reading newspapers to websites; that still goes to the bank and post office to conduct business; still has cotillions, Benevolent Societies and debutante balls; where men make time to get their shoes shined properly and any self-respecting woman has gloves and hats appropriate for any occasion.

But I doubt it.

Or how about a place where, when a restaurant changes its ice service from hand-chipped to machine made, the community convulses. (In a begrudging concession to modernity, Galatoire’s stuck by their machines. Of no matter; a proper Sazerac is served straight up, anyway).

All this speaks to a very provincial and parochial community, to be sure. But it also speaks to larger intimacy and graciousness, a community without pretense or guile.

Folks always said it would take an act of God or a natural disaster for change to happen around here.

But it’s no wonder that our hospitality industry proved the most resilient sector of our economy, of our city, after Hurricane Katrina and the subsequent levee failures flooded us, humiliated us, bent us – but never broke us.

Before most business and commerce regained footing, our service industry snapped-to, got about the business of making music, food – and yes – even fun. If there was anything this city needed in our winter of discontent that was 2005, it was a little laughter. And we brought it. Without apology.

It is our way.

However, something had to give. We conceded (begrudgingly, of course) to modernize, upgrade and lay down some fresh paint after the storm. A few of the buildings stand up a little straighter now, and that’s not such a bad thing. Your transportation options have increased from cabs and mule-drawn buggies to pedi-cabs and Uber and double-decker buses and even Segways, and there are more bicycles and streetcar lines in the city than before Katrina.

New Orleans, it’s not like other places. But fortunately, it is still very much like New Orleans. Even after the necessary and inevitable changes wrought by Katrina, we’ve still got our soul, our spirit, our funk and our mojo working overtime.

And, impossibly, there are even more restaurants to take those bicycles and streetcar lines to than there were before the storm.

Some folks say our cooking is magic, but the true wondrous mystery is just how many magicians there are cooking here.

I’m sure there’s a study somewhere.

In New Orleans we famously claim not to eat to live, but to live to eat. We dance in streets once mired in tragedy, sing communally of our despair and love fiercely among the ruins.

We move forward yet reclaim our past. We expand, spruce up, go with the flow, accommodate the 21st century – while still embracing and exhibiting the charms and traditions of the 19th.

There is no city like New Orleans, in America, in the world. It is timeless, lost in time yet trendy and in-the-know. It’s where the Old World and Hipster City, USA collide in a perfect storm of vitality, hospitality and the triumph of the human spirit.

Upon the site of catastrophic ruin and shattered lives and broken dreams, we rebuilt a city with neighborhoods now teeming with street life, bustling restaurants, edgy galleries, rollicking dance halls – brought to you by tens or thousands of folks proud to don their black-and-white uniforms and greet you at the door, turn on that light and invite you in.

We’re proud of what we’ve got and what we’ve done. But we are well aware that none of this recovery could – or would – have happened without the help of hundreds of thousands of our fellow Americans who volunteered to help us clean up this once-awful mess and get about the business of living again in a city that lives loud, laughing and loving long into the night.

Nobody lives better than those who live in New Orleans.