Each November, Emeril’s Boudin, Bourbon & Beer transforms Champions Square into a friendly arena of sorts, where dozens of chefs from around the country compete to turn boudin into the tastiest dishes imaginable.

It’s great food and an even greater cause. Boudin Bourbon & Beer, along with its partner event, Carnivale du Vin, have raised millions of dollars that support various hospitality industry initiatives, thanks to Emeril Lagasse Foundation.

Created by Lagasse and his wife, Alden, in 2002, the foundation’s mission is to use nutrition and culinary arts to inspire, mentor and enable New Orleans youth to reach their fullest potential. 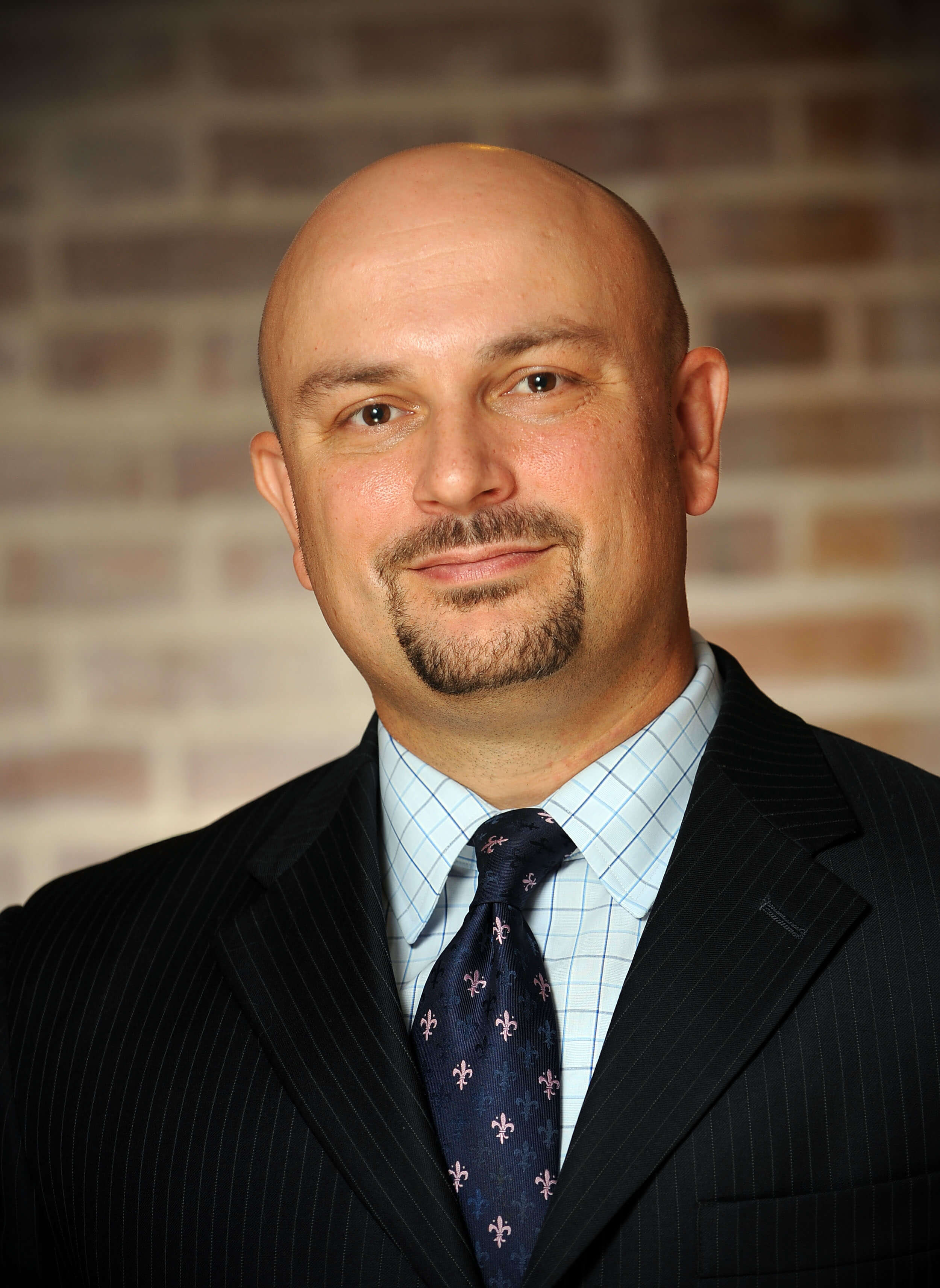 Brian Kish has been President of ELF since 2014. Kish grew up in Cleveland, and worked in restaurants all throughout his teenage years, before finding his true passion for fundraising, at Ohio University. After a career of working for successful organizations like University of Arizona Foundation, Kish made his way to New Orleans, and married his love of fundraising with his love of food as President of Emeril Lagasse Foundation.

Over the past 15 years, Emeril Lagasse Foundation has given more than $7 million to local nonprofits – more than $1 million in 2016 alone.

Kish recalls that one of the first students accepted into the NOCCA culinary arts program went on to study at Johnson & Wales University (Emeril’s alma mater). She has now made her way back to the Emeril family as a chef at new restaurant, Meril. “These kids are taking this classwork and saying that ‘this is the career that I want.’” ELF is helping to change lives in ways that many of these kids never dreamed possible.

With New Orleans being such a popular hospitality and culinary city, Kish says that he consistently hears gratitude from local hotel owners and chefs, praising the work of these non-profit programs in mentoring young talent. They love that the kids who graduate from these programs already have kitchen training and basic restaurant skills; they’ve been vetted by the best. “To sustain the hospitality business in this city, we need to continue to put qualified people into available positions. And these programs are one way – perhaps the best way – to do that.”

The mentoring aspect is critically important to Emeril. Lagasse speaks often of his own mentors and the indelible role they played in his success. Groups supported by the foundation all have an element of providing role models for children, especially at-risk youth.

Students who come through ELF-supported programs have an opportunity to work in the food-service industry’s highest levels, and some are well on their way. But that isn’t necessarily the foundation’s ultimate goal. Kish says ELF hopes to simply teach kids how to prepare nutritious meals so that they don’t have to rely on others. 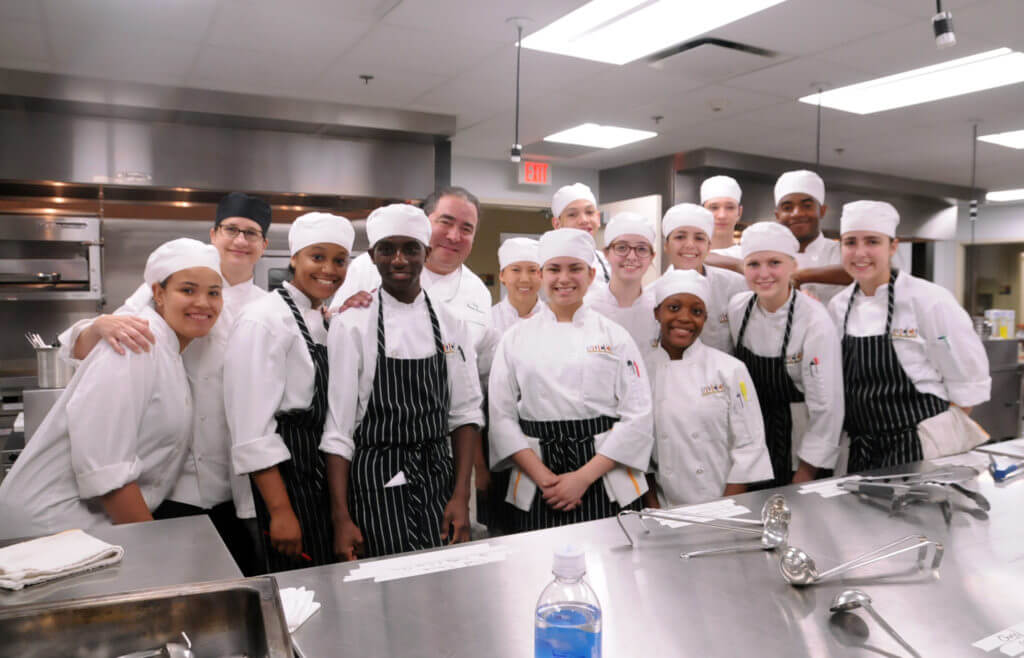 Café Reconcile, for example, tasks itself with giving young people in their late teens or early 20s an opportunity to escape what are often very challenging circumstances.

“You’re taking a population that maybe needs a little bit of mentoring and empowerment. But if you do it, they now have the hard and soft skills to fill a huge need in this city,” says Kish.

The economic engine, of course, is Lagasse’s vision in creating a signature event in local cuisine – no small task for a city world renowned for its gastronomic contributions.

Kish describes a rather interesting journey for the foundation’s fundraising centerpiece. It began with Carnivale du Vin, the charity wine auction and gala dinner, originally intended as ELF’s signature event.

The inaugural event, however, was fatefully scheduled for 2005. After the devastation of Hurricane Katrina, organizers hustled to move the event – virtually overnight – to Las Vegas. Despite the upheaval, Carnivale du Vin proved an immediate hit, and it now has the reputation of a nationally recognized event.

Boudin, Bourbon & Beer kicked off in 2011 as a more accessible counterpart. A $99 ticket offers access to an all-you-can eat feast, including the spirits, and an amazing concert from some of the nation’s biggest acts.

The 2016 event attracted 5,000 people, 1,500 of whom were from out of town, including every U.S. state and several foreign countries. Kish says that, while some of those visitors may have been here coincidentally, the level of Boudin, Bourbon & Beer’s success has solidified its place as a destination event.

“Some of the things we do, I don’t know if you could do in other cities,” Kish says. “There is incredible generosity from the sponsors. But it’s also the 60 chefs who come. They buy the food. They take a Friday off during a busy season, and they do this.”

They also represent a preeminent collection of talent. Kish says more than half of the 50 local chefs who take part are James Beard Award winners or nominees, or they’ve appeared on network TV shows.

Moreover, Kish says the culture of New Orleans’ food industry has an organic spirt of collaboration, something often unheard of in larger, hyper-competitive markets. 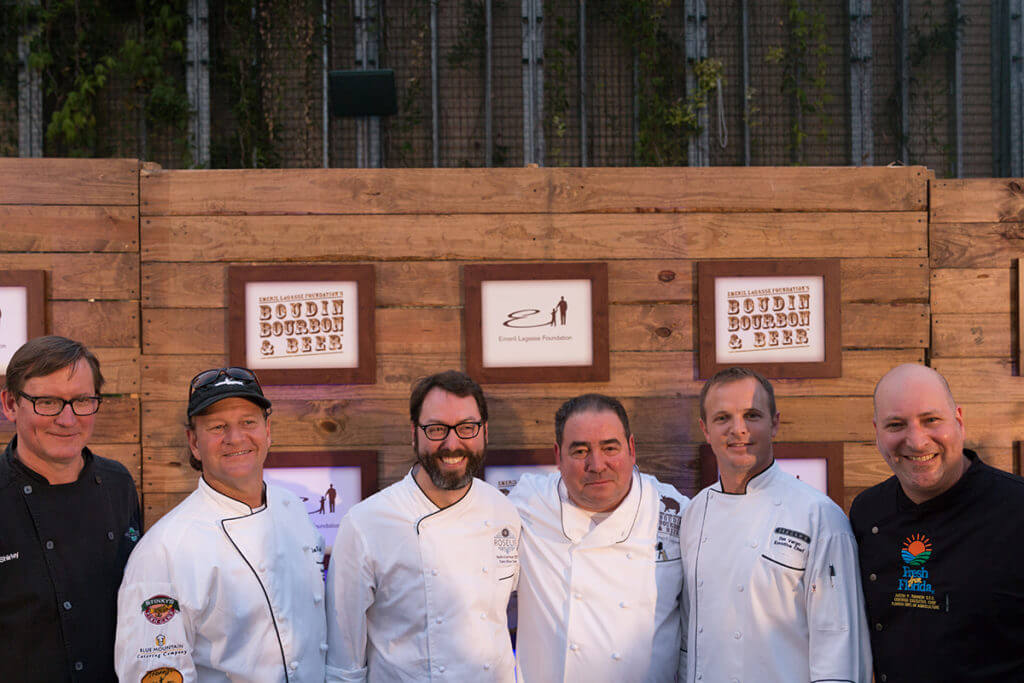 Boudin, Bourbon & Beer and Carnivale du Vin combines those unique qualities in an ideal complement to the awareness generated by #nolaNOW.

“We have a chance to invest in these nonprofits impacting kids’ lives. We acknowledge they need help and need to be inspired,” Kish says. “We can do it in a fun way that helps fill the needs of a city built on hospitality.”

“Think about those who were young kids during Katrina – they are now teenagers. They don’t remember life before. They remember life after. And so for them, they’ve continually seen growth and betterment over the past 10 years. And New Orleans is a unique place in that we can continue to build that growth through food!”

“New Orleans will continue to grow and flourish if residents continue taking ownership of their destiny,” Kish says. “We look to others to help us, and their involvement is important. But our destiny will be defined by us and the choices that we make.”