We feel strongly that exercising your right to vote is important for every last person in New Orleans – and now that we have the results of our latest elected officials, we are excited for what’s next. About 39% of registered voters voted in the 2015 election, and there were some surprising results.

For the first time in 8 years, Louisiana has a democratic governor, John Bel Edwards. Billy Nungesser was elected as the lieutenant governor. Refresh your knowledge on the roles of these statewide elected positions below, plus get the details on Edwards’ inauguration. 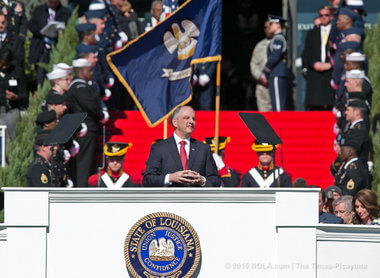 Democrat John Bel Edwards will sign bills into law at his post as governor. With a strong background that includes graduating from the United States Military Academy at West Point, Edwards says he will focus on education funding while he is in office.

Edwards seeks to lower hikes in college tuition and protect university funding for educational programs, HBCUs, and other higher-education outlets without cutting the budgets for K-12 schools or hospitals. In turn, Edwards believes that this extra attention to education will result in more jobs.

“I will address the structural deficit problems holding [businesses] back because they prevent us from training and retaining qualified, well-educated workers,” he said recently to a group of business owners.

The role of lieutenant governor is particularly powerful in Louisiana. This elected official serves as the commissioner for the Culture, Recreation and Tourism Department, with an utmost duty to preserve, showcase, and market the state’s (and, by extension, New Orleans’) culture.

Billy Nungesser is our new lieutenant governor, and he has publicly noted that tourism funding must be protected. New Orleans, in particular, is an economic engine that drives much of the state’s overall income through tourism; tourism in New Orleans nurtures tourism throughout the entire state and even throughout the region.

THE INAUGURATION: A Simple Affair

Compared with previous inaugurations, John Bel Edwards decided to minimize the pomp and circumstance of his inauguration. However, it was still a beautiful and formal affair with details such as a morning Mass, the inauguration ceremony, and an evening ball.