New Orleans is a tourist destination year round, but it certainly sees peak times like Jazz Fest and Mardi Gras where we can always expect extra visitors. Ironically, however, the holiday season is not traditionally a peak time for tourists to come to New Orleans. The holiday season is one of the times when many local New Orleanians need money in their pockets the most, whether to use to purchase gifts for loved ones, get their finances in order at the end of the year, or travel to go see their family. That’s why the tourism industry has stepped up their game in the past few years to entice more visitors to come to New Orleans during the holiday season – thus putting more dollars into the pockets of locals when they need it most. 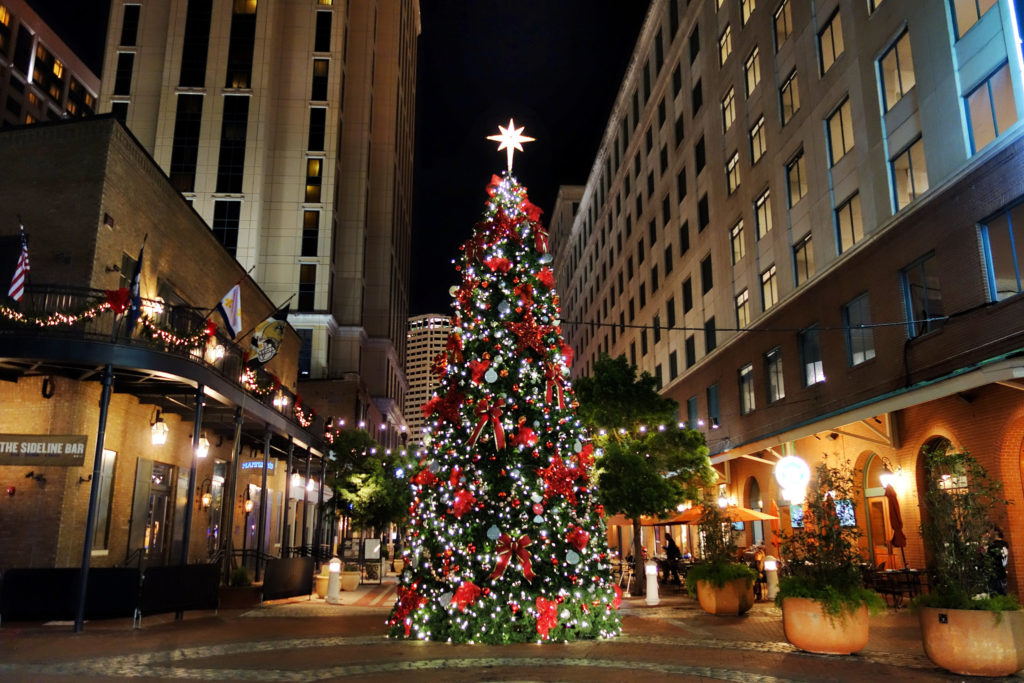 Miracle on Fulton Street is just one of many industry-wide efforts to increase tourism during the holiday season. (Photo: Paul Broussard)

On the surface, these seasonal events seem like fun ways to get into the spirit of the holidays, but they also have a deeper meaning: they showcase industry-wide efforts across tourism and hospitality to economically support locals through the path of a tourism dollar. Find out just how tourists help us below:

NOLA Christmasfest: Debuting in 2014 for the first time, NOLA Christmasfest has already established itself as a holiday favorite for locals and visitors alike. This year, Christmasfest will be open on Christmas Day – an ideal destination for visitors in town unsure of how to spend the holiday. Christmasfest incorporates holiday elements like an indoor ice-skating rink, beautifully decorated fir trees, giant inflatables, seasonal characters like Santa, and beyond. What’s more, the fest takes place right inside Ernest N. Morial Convention Center, one of the largest convention centers in the country and a crucial element of the New Orleans Convention & Visitors Bureau. This 10-day festival proves that convention centers aren’t just for trade shows or meetings.

LUNA Fete: New Orleans has its roots as a European city, which is why LUNA Fete — a free and avant-garde light show that started in Europe – feels like a natural fit. Using three-dimensional building imaging, international artists have descended upon New Orleans to light up parts of the Central Business District and Central City to dazzling effect. Because of the show’s international recognition, visitors from all over the country and all over the world flock to see LUNA Fete. After its debut last year (the first of its kind in an American city), LUNA Fete is even bigger in 2015. Although the event is free, its several locations in prime parts of the city encourage visitors to stop in at local bars, restaurants, and shops after the mesmerizing light show.

Reveillon Dinners: Although this Creole tradition dates from the mid-1800s, current Reveillon dinners are a delicious way to attract visitors vying for a chance to indulge in not only our cuisine but also our historic culture. Restaurants who partake in serving Reveillon dinners, which typically run through the whole month of December, are doing their part to bring in tourists looking for an authentic taste of New Orleans.

Miracle on Fulton Street: The tourism industry in New Orleans spearheaded Fulton Street’s designation as a pedestrian-only spot, making it fun, accessible, and safe for visitors or locals looking to explore without worry of cars or other road hazards. During the holidays, local tourism and hospitality initiatives have taken it one step further with “Miracle on Fulton Street” programming, which includes live music, festive drinks, and all the hallmarks of a winter wonderland – including faux snow that softly trickles down. Similar to LUNA Fete, this event is free, but it draws visitors to the site to spend money in local hotels, bars, restaurants, and shops.

Free Cathedral Concerts: Two historic spots in the city – St. Augustine Church in Treme and St. Louis Cathedral in Jackson Square – hold ongoing holiday concerts in December that are free and open to the public. This welcoming attitude warmly draws in visitors, who then will go on to spend money in myriad ways, whether purchasing gifts for friends and family back home or capping off the evening with a dinner at a French Quarter restaurant.

Celebration in the Oaks: City Park is one of the largest public urban spaces in the country, and each holiday season, it transforms into a beacon of shimmering light. Celebration in the Oaks brings in thousands of visitors each year and allows them to explore (and spend their tourist dollars) in a different part of the city – Mid-City – as opposed to traditional tourist areas like the French Quarter.