Mayor Mitch Landrieu and a host of other dignitaries were in attendance at the dedication of Yulman Stadium, the brand new jewel on the Tulane campus. The university’s marching band, spirit squad and cheerleaders added further to the celebratory nature of the special ceremony that was held just before the big home opener versus Georgia Tech. Tickets for that first game had sold out in just 20 minutes.

Richard Yulman threw down the gauntlet at the dedication of the new facility. With $20 million still to be raised to pay for this stunning new university stadium, Yulman pledged another $10 million, and he challenged Tulane alums and others to match that $10 million. The former Serta chairman’s latest gesture has been dubbed the “Yulman Challenge.” If successful, the matching gift proposal will result in a 100-percent privately-funded stadium. 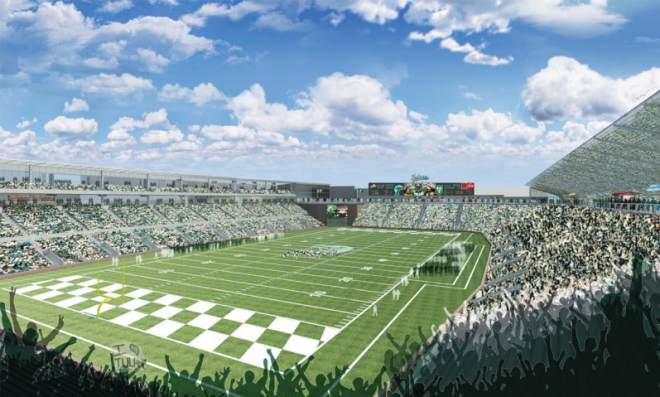 The ceremonial football-themed ribbon was cut by Yulman and his daughter, Katy Yulman Williamson. It was Katy’s decision to attend Tulane that first got the Yulmans involved with the stadium. At the moment that ribbon was cut, a new era in Tulane football began. Now, fans of visiting teams will enjoy a modern, state-of-the-art facility right on campus. New Orleanians have an opportunity to welcome these visitors, many of whom will undoubtedly expand their visits to our city well beyond the university area. We can strike up a conversation, lend a helping hand or simply offer a welcoming smile to these new waves of tourists.

The Heritage of Tulane Stadium

At the dedication festivities, Darryl Berger, the Tulane University Board of Directors president, spoke of the rich history of Tulane Stadium, including the dramatic shutout upset of LSU in 1973. 86,000 fans watched Tulane defeat LSU, 14-0. Indeed, for decades the Green Wave and various Sugar Bowl contestants played at the previous Tulane Stadium.

Imagine how many fans got their first taste of Tulane and the city during these visits. In some cases, members of their families may have gone on to attend Tulane. Eventually, as alumni, their sons and daughters may have chosen to attend the University as well. And, many of these great outcomes can be traced back to that first positive visit to New Orleans.

As good hosts, we have the potential to influence tourist experiences in ways that can have a truly lasting impact on our great city. So, when we run into visitors that have experienced the brand-new stadium, let’s take that extra step to making their experience one that’s particularly positive and memorable.