In 2018, the New Orleans tourism industry provided more than 92,800 jobs, welcomed more than 18.5 million visitors, including 600,000 international travelers, who spent more than $9.1 billion, generating $555.6 million in tax revenue and saving every New Orleans household $3,587 in taxes. D. K. Shifflet and Associates will report the 2019 visitor numbers this Spring.

“At this year’s Tourism Leadership Luncheon, we are proud to join our members, partners and more than two dozen elected officials to showcase how tourism is a not only a driver of New Orleans’ economy, but also that of the state of Louisiana,” said Stephen Perry, president and CEO of New Orleans & Company. “Our team works tirelessly to promote our destination through convention and tourism sales, public relations and marketing to bring travelers that fill our hotel rooms, eat in our restaurants, shop at retail and patronize our diverse businesses, supporting our workforce. Our employees will continue to promote New Orleans’ unmatched hospitality, unique experiences, culture and history and by doing so ensure that tourism’s economic impact grows.” 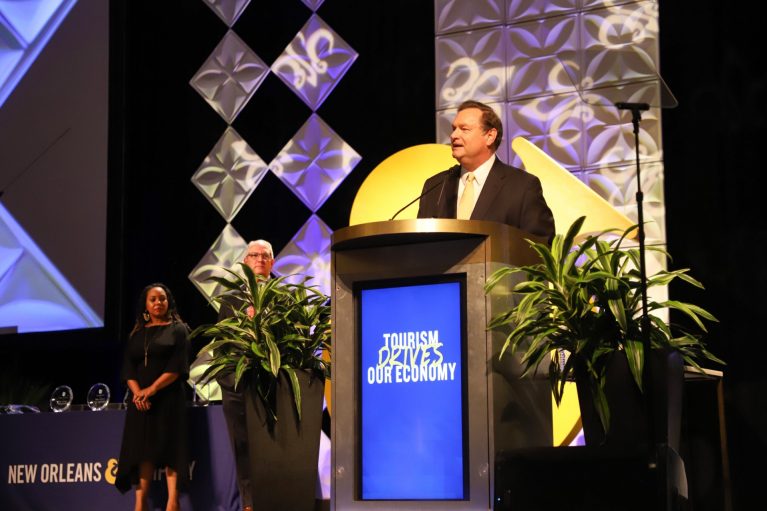 Several awards were presented during the luncheon to legislators and members whose dedication has led to the success of the tourism industry. Senators Kirk Talbot and Jimmy Harris were honored as Friends of the Industry, an award given by New Orleans & Company to legislators who have served as ambassadors of the industry. Antoine’s Restaurant and Tujague’s were presented the Bienville Award, honoring their 180 years and 164 years respectively of culinary excellence and cultivation of New Orleans’ world-renowned cuisine. Terry Epton, executive vice president at Hosts Global, is the recipient of the Captain Katz Award for his exemplary service to New Orleans & Company and Doug Thornton, executive vice president at ASM Global, and leader of the Mercedes-Benz Superdome for many years, received the Hall of Fame Lifetime Achievement Kabacoff Award for his decades of achievements and dedication to making New Orleans America’s epicenter of sporting championships. Jerry Reyes, general manager at The Westin New Orleans, and Shari Fisher, director of sales at Hotel Monteleone, received the Career Pathways Award for lifetimes of achievements and career growth in the hospitality industry.

In addition to Governor Edwards, attendees also heard from industry leaders on the importance of tourism to our city and state, including highlights of New Orleans & Company’s successes in 2019 including: